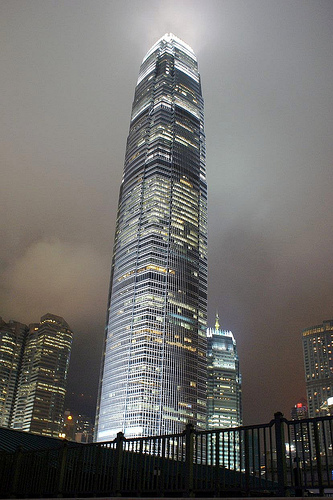 I’ve realised I could have easily done just a top 5 on Hong Kong itself. I love the city and pretty much all my favourite buildings are either hidden or standing proud somewhere on Hong Kong Island.

Seeing as I mentioned the Bank of China in my previous post I thought I better not include it again in this one so here are my Top 5 Hong Kong buildings.

Hidden away from the south east corner of Victoria Park on Temple road the Tin Hau Temple is not the most awe inspiring building. But it’s a small haven of peace in an otherwise bustling area. I have visited every time I’ve been in Hong Kong and what amazes me the most is that I always see the same guy sat in a corner scrawling on his paper. Designed by the British architect Sir Norman Foster and one of the most expensive buildings in the world the HSBC building is completely unique.  It is a strange structure, almost spaceship like. Whilst being much shorter than some of the buildings around it the building still manages to stand out. Statue Square is close by and here you will find all the Filipino maids gathering on their day off. Another strange fact – I have actually played Frisbee at 4am underneath this building much to the amusement of the security staff. Once the tallest building in the city, Central Plaza still has some unique claims to fame. It is actually triangular in shape and houses the sky city church which is the world’s highest church (in a skyscraper). At the time of construction it was also the world’s tallest building made out of reinforced concrete. The most impressive feature however is the 4 bar neon clock at the top of the building which can be seen from almost anywhere in Hong Kong. The four neon bars display different colours in 15 minute intervals and blink at the change of the quarter. The best view of the Lippo Centre is from Hong Kong Park. I’ve sat in there many times looking at both the Bank of China and the Lippo Centre. The building is actually two towers one slightly taller than the other. They both have the same unique design with areas and windows protruding out all the way up which makes the building seem less severe and upright. A great piece of design. The Two IFC was half way through construction during my first visit to Hong Kong so when I returned to visit a few years later it was incredible to see it finished. It was the tallest building in Hong Kong and one of the top 10 tallest buildings in the world. It has had one of the world’s largest advertisements placed on its facade and dwarfs its little sister tower one at nearly double the height. So these are my favourite buildings in Hong Kong along with, of course, The Bank of China. If you are ever in Hong Kong then all are worth a visit. Other notable mentions are the Hong Kong Library, World Trade Centre, The Cultural Centre and also the Convention Centre. For more traditional buildings there are places like Western Market and the Man Mo Temple.

So which are your favourite buildings from around the world or a particular city?